Front/Space as a law office from Google Street View, circa 2008(?)

Origins and Operations: How Front/Space emerged from DIY to DI(WE)

Stepping in as co-director of Front/Space, nearly two and a half years ago, I wouldn’t have believed where we are now, what we have accomplished and what we have yet to do. Alternative and DIY spaces are a necessity to the complexity of the cultural landscape, they are safe havens for risk taking and interdisciplinary practices that do not rely on institutional critique, commercial constructs or business practices. They attempt to reimagine and redefine space and often go unnoticed by the general public.

When I speak about Front/Space I strive to speak to these ideas as it emerged from the perfect combination of opportunity of space and cheap rent that draws many artists to Kansas City. In 2010, it is was founded by a rotating crew of residents and volunteers who came back to the city after college to discover many changes and development in the Crossroads Arts District. Previously a law office, they rented a building that conveniently contained a storefront window that was big enough to exhibit solo work, a collaborative project or host an intimate performance. Steadily, Front/Space grew as a collaborative effort with each resident and volunteer contributing to multiple facets of the project. They began showing work generated by friends, colleagues, architects, writers, and civic media makers, contributing to the built-in audience of First Friday – a monthly gallery crawl that many cities from across the country have adopted. 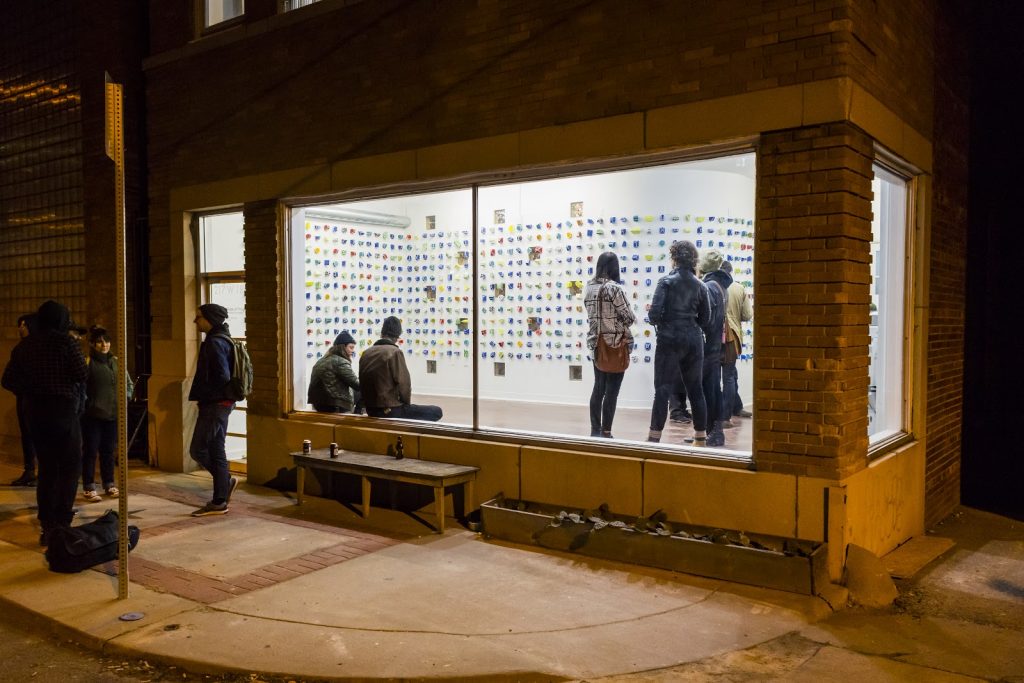 Front/Space at night with February 2017 exhibition The Shape of Things by Kayla Mattes and Justin Seibert. Photo by Timothy Amundson.

First Friday in Kansas City transforms the Crossroads Arts District from a bustling 9 to 5 neighborhood to a packed party extending a near 8 block radius. This type of density is rare, as people travel from midtown and the suburbs to participate in this event. Food trucks, vendors and performers line the streets while people pack into galleries to view art or scope out free booze.

In the early stages, Front/Space offered a different type of experience that subverted much of the spectacle that has become First Friday. Situated on the edge of the district, many people would walk past FS after parking their car, with a slight glance thinking “what is this?” Not conforming to the traditional “white cube”, Front/Space immediately attracted those who were curious, thoughtful and wanted to build a broader conversation about what was happening in the Kansas City art scene.

In 2014, after approximately 4 years of running the project completely out of pocket, Front/Space was unknowingly nominated and received a SEED Grant from the Robert Rauschenberg Foundation – three installments of $10,000 that were to span the course of three years. In this time, the directors Kent Szlauderbach, Leandra Burnett and Sarah Murphy were working on their capstone project Civilian, a publication showcasing the intersection between art and civics. With the end of this project in sight and other prospects and opportunities on the horizon, it was time for them to move on. This surprise grant was a turning point for the previous directors. Not only did it legitimize the work they were doing, but also confirmed their determination to not let Front/Space absorb back into the Crossroads once they left. It was then I was tapped to join Front/Space in fall of 2014.

Even with a background in event planning and arts administration I was a bit nervous to embark on a project that seemed to have an established presence as one of the only alternative/DIY spaces in the Crossroads. Front/Space had been a place of discovery for me, and I was drawn to its architectural charm and unassuming presence. As a visual artist with passions for community development, I saw potential for new projects and quickly began research on artists and cultural workers I wanted to highlight and engage. However, I soon realized that this was only one perspective. After exploring multiple options, I decided to ask Kendell Harbin to be my collaborator in this project. Kendell and I had many similarities that would set the stage for a healthy collaboration including that we both had our final projects as seniors at the Kansas City Art Institute at Front/Space. Though our respective shows were completely different in content and concept, we both had a shared love for this strange space as a way to challenge what was going on in the Crossroads.

Once I had courted Kendell into being my collaborator and with funding in place our next questions were: Where do we go from here? What work is compelling? How do we want to run our space?

The first idea for a program was centered on the simple concept of “work” and “working together.” Everyone brought a task, project, writing, whatever they were putting off or needed to complete and then we gathered in the storefront to complete the task together. Kendell and I provided a small resource library, tables, space and brought in collaborators to create activities to navigate mental blocks and participate in to-do list consultations. We felt that this first event really set the tone for how we wanted to run our space, where we were working side by side, sharing resources and stories, challenges and pipedreams. We saw Front/Space as a space that could be uniquely community driven, to shape the vision of what can be possible within these walls.

Now in 2017 and the wake of the contentious election and in the face of a new administration, this concept of “work” has begun to resonate even more passionately. We have so much work to do and it is together that we make this work stronger. Moving forward, we see Front/Space as the platform to engage new audiences and extend to new communities. Though this plan doesn’t necessarily have clear action steps, we can see that our small organization has already shaped and inspired new artist run spaces in Kansas City. We hope that this pooling of resources and information is the key to a great start.

A link to all past residents, co-directors and founders can be found here.