On art and senior female culture. 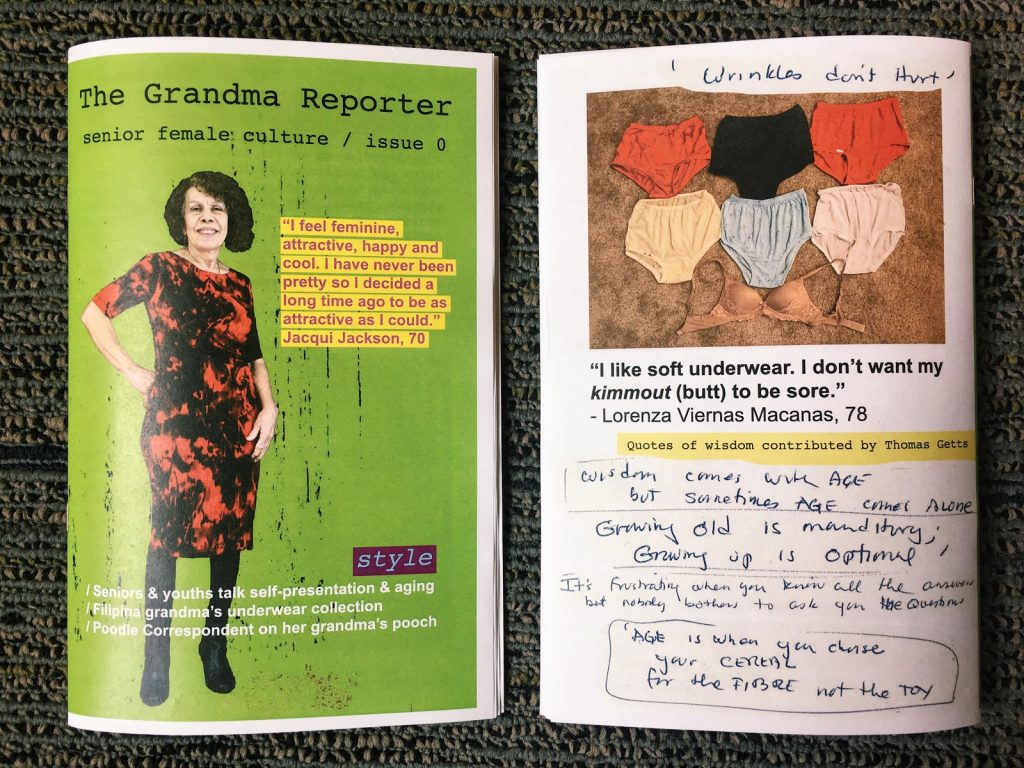 Last year, I was brainstorming the creation of a publication on senior female culture I wanted to title The Grandma Reporter. My classmate suggested writing a manifesto. Here is an early draft still in the works:

“The Grandma Reporter is a publication committed to the subculture of senior females and their rich worlds existing across the earth, where elderly women have lived forever. We aspire to be accessible to young and old but especially to elderly women. We hope to energetically connect our readers, contributors and interviewees in a senior female culture movement. We believe in: proudly declaring your age and keeping it a mystery; dressing up, down and from the heart; talking about death and thinking about past and future lives; walking sticks, wheelchairs and flying in your dreams; wrinkles, bulges, spider veins and bunions; ‘old’, ‘elderly’, ‘senior’, ‘nag’, ‘ageless’, ‘prune’, ‘sage’; discussing disease, incontinence and great television shows; sharing stories of crime, adventure and nonconforming genders; considering the struggles of growing old in a young, technology-focused world; food, genes and other things passed through generations; uncovering long loves, heartbreaks and sex that evolves with age; swimming as a magical way to keep fit in spite of on-land mobility challenges.”

I ended up making a test issue within a frenzied week and a half, in part for the final assignment of the History of Art and Social Practice class taught by Ariana Jacob. I described it as “a publication on senior female culture (including the occasional senior male), exploring topics ranging from fashion, recipes, crime, love and adventure to bunions, caregiving, gender, aging bodies, ageism and death.” My hopes are to find new ways to express the experience of aging in its full spectrum. The name was inspired by The Asian Reporter, a Pacific Northwest news source. The font had to be big enough for seniors. I thought about the term ‘grandma’ and whether it might be alienating to certain sectors of elderly females. In the end, after soliciting advice from various groups of people (and receiving suggestions like ‘silver fox’), I decided to go with it and hope the word could gain currency as broadly referring to elderly females. 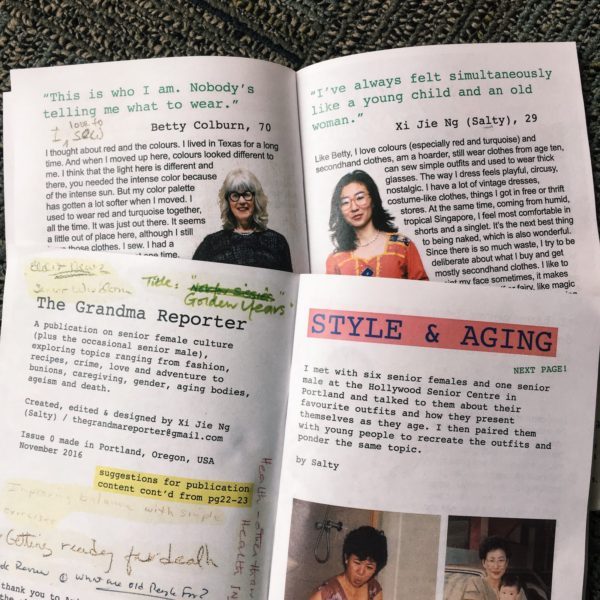 The theme of the test issue was style, which felt like a fun, accessible topic of potential depth to start with. I decided to interview female seniors on their favorite outfit and their thoughts on self-presentation as they age. After that, I would pair each senior with a youth, who would recreate the outfit and ponder the same topic. The Hollywood Senior Center in Portland kindly agreed to put out a call for a group session. Eight seniors who were active members of their community showed up, one enthusiastic male included. Per instructions, most came in their favorite outfit. As each of them mused about their clothing and style through the ages, I sensed a bubbling curiosity amongst them and by the end, a couple new friendships were made. The session felt like a kind of “forum” (as described by one of them) holding a fun investigation on a topic we momentarily found to be of great interest, and that wasn’t usually discussed. It was, eventually, a counsel on identity in old age, and I was the fortunate collector of bouquets like using coke cans to curl hair and a self-confidence that comes with maturing age.

I then went back and intuitively matched each senior to a younger person I knew. I sent them an image and some quotes from their partner, and set out to meet each of them, mostly in their personal spaces where the outfit could be experimented with. Our conversations afforded moments of intimacy in which, for me at least, there was the invisible, comforting presence of their older style accomplice. Though both sets never met, the younger participants were evidently inspired by if not curious about their partner. Our conversations made me see, in spite or because of the unbridgeable gulf in experience between the generations, a kind of longing to reach across the ages. Pondering aging when you are five or twenty-four ended up being a curious, somewhat profound exercise. I was taken by an eight year old boy who recently decided his new mission was to be “funky and classy”, “because it makes me feel better”, and my friend who said, “I think about everything that I’ve done up to now, it makes me feel like I deserve to be 24”. From the start, I had intended the audience of this publication and my projects on aging to include young people; this experience made that desire clearer. 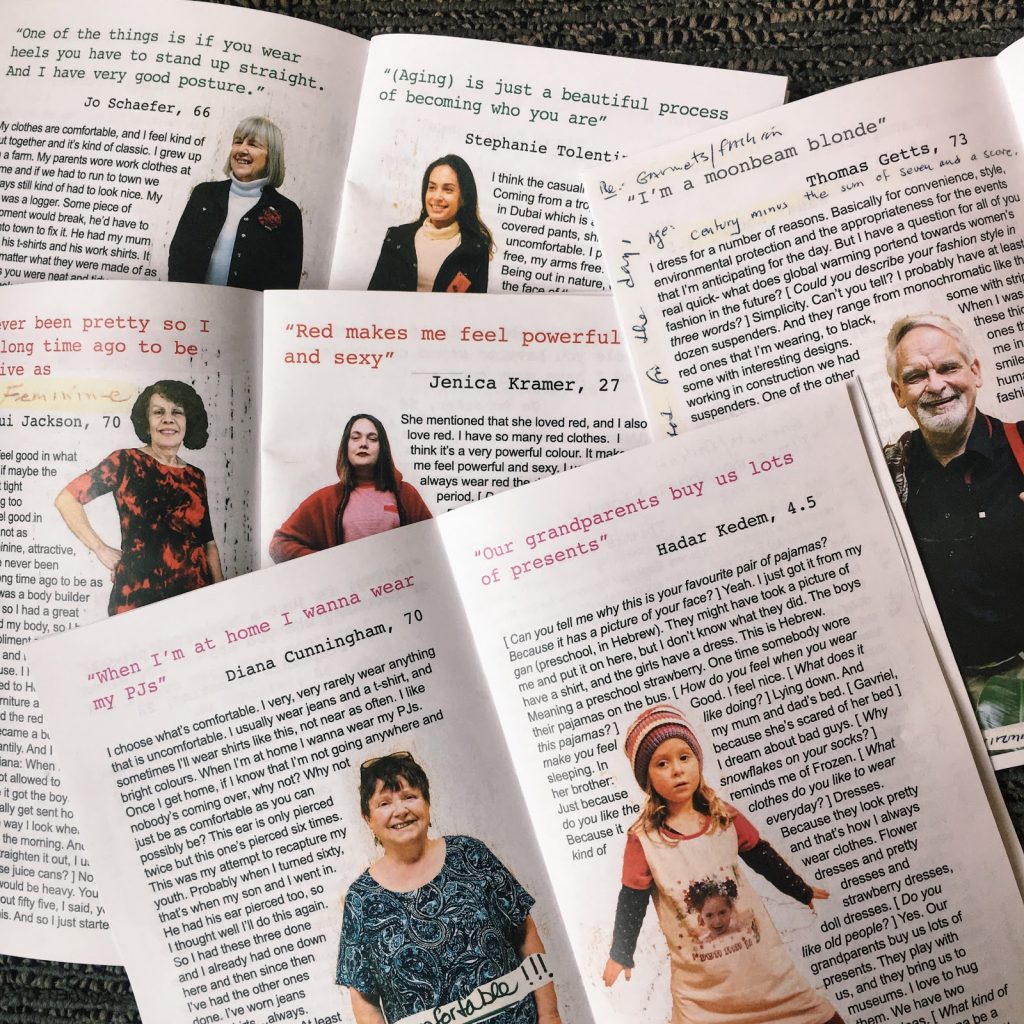 With the same group of seniors, I conducted a discussion on what they would like to see in, and contribute to, such a publication. The wide range of responses included getting ready for death, how to keep your driver’s license, hoarding, dating, confronting ageism, protecting your bones, relationships with younger family members and having a hobby. These responses are presented in the test issue. Later this year, I may collaborate with these seniors on the next issue.

The first issue also included articles that reflected on the theme differently in terms of content and relationship/interaction with elderly females (personal essays, interviews). My hope is for future issues to include a range of articles centered around an organisation (for example, a senior center), country or topic. I also plan to invite artists to contribute to the publication, discussing or presenting artworks related to senior females.

Me with two of the younger participants, Hadar Kedem (L) and Gavriel Kedem (R). They made their mother read and reread their interviews in the publication to them.

Production costs were kept as low as color printing could reasonably go. I did it on Portland State University’s printers and would like to take a more sustainable approach for future issues. I sorted and stapled the issues together on my kitchen table. A few dozen were given to the Hollywood Senior Center for the participating seniors as well as others to enjoy. It is available as a PDF online (with a donation encouraged) and being stocked at an independent Singapore bookstore, with plans to do the same in Portland. Other possible avenues include senior centers and hip cafes that young people frequent.

I am slowly figuring out who this publication can reach and where. I imagine the networks of readers it might create in different pockets around the world, building a small movement in senior female culture. I am also thinking about the curiosity a Singaporean female elder might feel when reading about her Portland contemporary, maybe learning about lifestyles so wondrously different and others so universal. And perhaps I could organize a meetup for this issue’s young and older pairs to get together in more of their favorite outfits. The possibilities are endless, and I feel more and more like a self-appointed advocate for the elderly or someone whose serious hobby is ‘older people’. 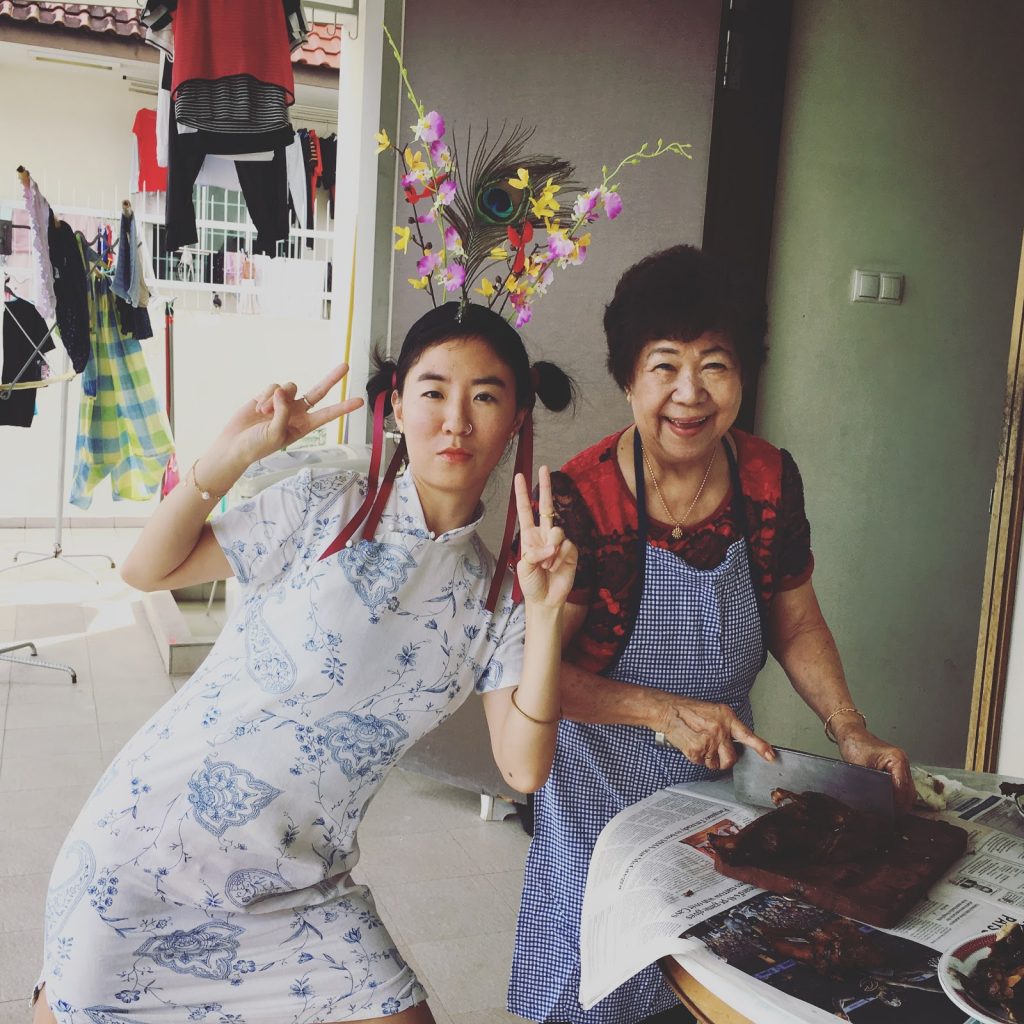 Senior female culture was validated for me through the lived experience of growing up close to my grandmothers. I have lived all my life with Mama (my paternal grandma), and Ah Ma (my maternal grandma) has always been close by. At some point in teenagehood, I started reveling in Mama’s everyday – from her schedule and the things she says, to her fats and fashion sense. I would share quotes and photos on social media, and started wondering if ‘the creative ways people live’ could be the beginnings of something that might be regarded as art, an idea I am sure most of my family members find bewildering.

When Ah Kong (my maternal grandpa) teased Ah Ma about being obsessed with durians, the potent Asian king of fruits, she said, “When I die burn durians for me to eat – just place them in my coffin.” Many Chinese believe that praying to your ancestors with meals they like or burning hell money (stacks of textured gold-leafed paper) will ensure them a happy, comfortable life in the underworld.

When Ah Ma says something like this, I start thinking about how that remark could, beyond her wildest imaginations, be transformed into something like an art installation. This might have the potential to “bring a new social imaginary into being”, in the words of Jonas Staal describing art’s contribution – except that where his commitment lies in alternative parliaments involving refugees and serious debate, mine lies in the geriatric, involving underwear choices, wrinkled body landscapes and bunions – an alternative political space of its own. Jonas’ words seem absurd in my context, where my hoped-for impact is miniscule in comparison to Staal’s. But to me this speaks to what art can do in small and possibly magical ways. 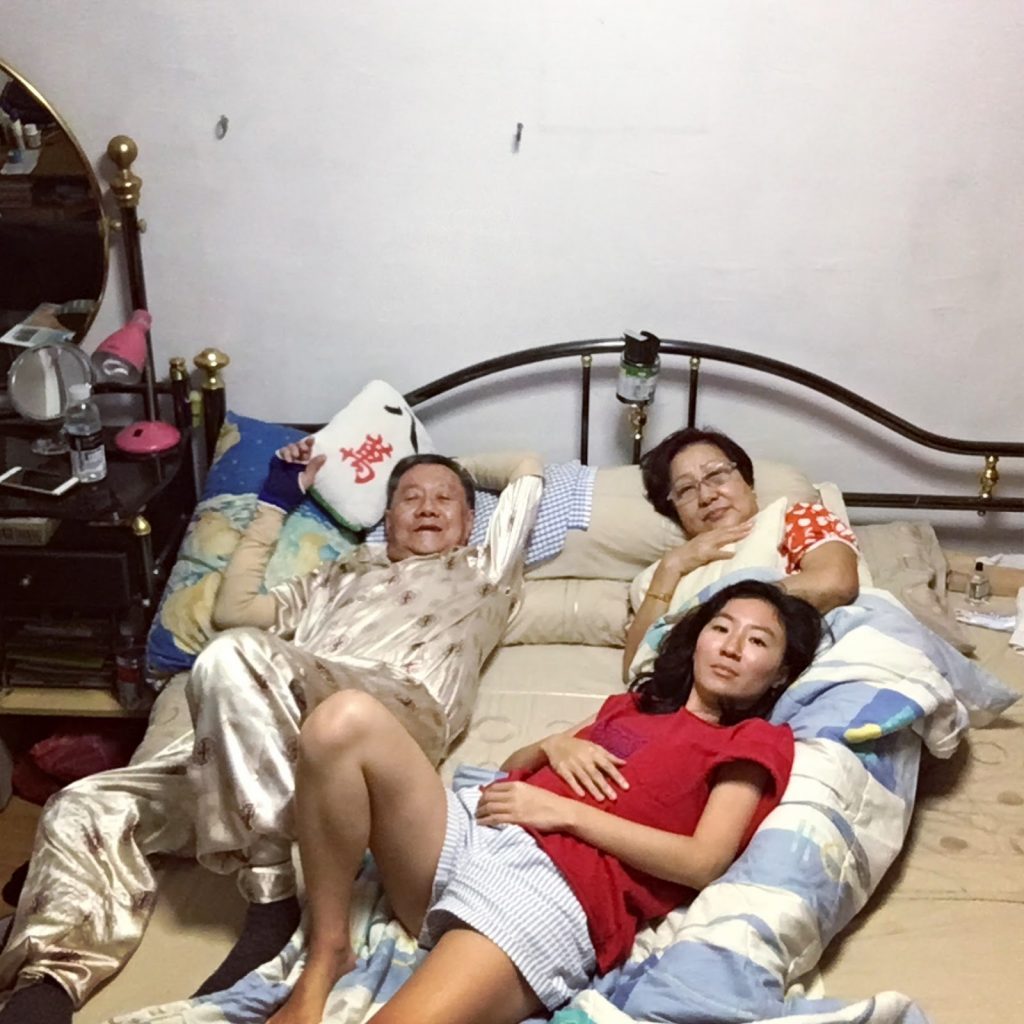 I am currently back in Singapore for the winter term and on a loose, self-initiated residency with my grandparents as site. I missed them so much in Portland that I decided to commemorate them and our relationship before it was too late. Some of the projects I’m working on are: an EP of Mama’s Hokkien (a Mandarin dialect) conversations; something on bunions; a talkshow with my grandmas on what they think of me; a short film on my grandfather’s eccentric inventions and habits. Progress has been erratic but I’m enjoying spending time with my grandparents, though their agreement to this is more of a whatever-she-wants-to-do approach. The nature of collaboration is food for thought when there are calls for deeper participation; there are just so many ways of working and being together. I am also thinking about the presentation of these experiments and would like to include my grandparents’ neighbours and friends in the audience, preferably in a personal or community space. 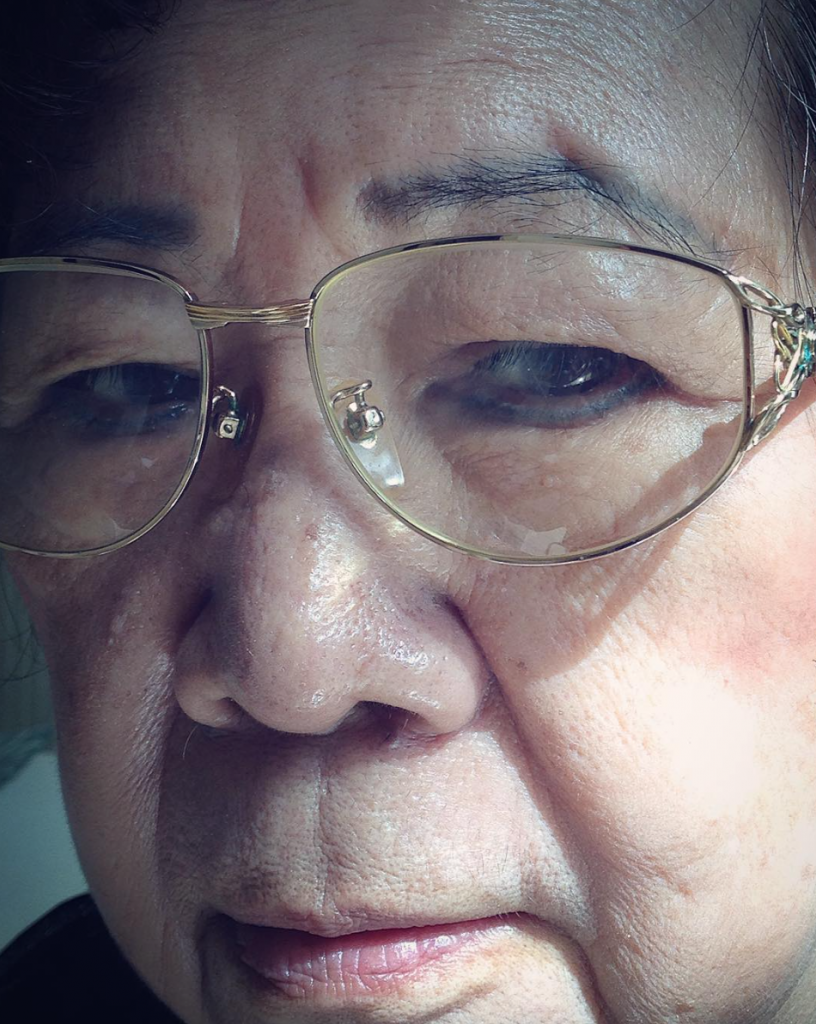 Coming from such an intuitive place, these artistic impulses are hard to articulate, but here’s a shot: I am transmuting my grandparents’ everyday lives, hoping to develop new ways of making art that take the sacred and banal everyday as material. In some private way not immediately apparent to even myself, I am hoping this will do something for my impossible wish that they may never pass on. More broadly, creating projects on senior female culture stems from my deep belief in the rich worlds that elderly females hold within them: fascinating, complex dimensions that go hidden today and which are at once warm, humorous, rigid, open, wise, eccentric and absurd. These worlds are inspiring material for relational art-making in thinking about form, aesthetics and audience. The geriatric has plenty of surprises in store for art.