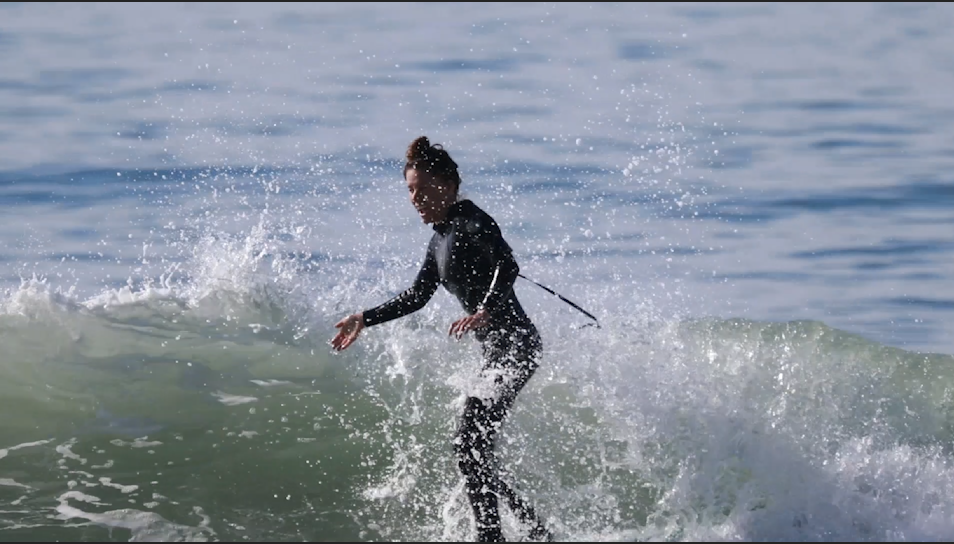 Through embedding herself in surf culture, Brianna Ortega uses art as a tool to explore the relationship between identity and place through questioning power in social constructs and physical spaces. She engages with topics of gender, race, Otherness, place, and the in-between spaces of identity. Her work is multidisciplinary, spanning across performance, publishing, organizing, video and facilitation. She is interested in experiential education, and concepts like home, localism, and boundaries.

Brianna (Bri) Ortega is currently a candidate in the MFA in Contemporary Art Practices: Art and Social Practice program at Portland State University, and holds a B.A. in Art Practices with a focus in drawing, video, performance, jewelry, psychology and family studies. She is the Founder, Publisher, Editor and Director of Sea Together Magazine, a global project uniting and rewriting women’s surfing through art, writing, and community. She has been surfing for over a decade and has moved 28 times in her life, which ignites her passion to connect with people across oceans, and be a bridge between others. She has shown & facilitated her work in Italy, Portland, SDAI (San Diego Art Institute) in San Diego, CBAA in Cannon Beach, with Aoka Surf Studio in New Zealand, and SDSL in San Diego.

Belonging in the Library (Conversation and Site-Specific Performance)

I walked around the Parkblocks of Portland, Oregon asking 50 strangers to respond to the question “What does it mean to belong somewhere?” in a 50-page book. While having a conversation with each stranger, they each wrote a response on their own numbered page in the 50-page book. I tore out each page of the book as a performance, and placed each page into selected library books, matching the page number with the page in the selected library book, at the Central Library in downtown Portland, Oregon. A Dewey Decimal code list now exists in the book with no remaining pages in it. By using Dewey Decimal Code list in the book, anyone can find where the 50 pages now belong in the Central Library, and see if the writing still belongs on the assigned page in the specific book or not.

When a stranger or new acquaintance asks me the “Where are you from?” question, I hand them a map with data. It is up to the person to determine where I am from based on evaluating the data on the map. If you want to email me that question, I will send you the map.

In this live performance, I ate local fruit from each state I have lived in. Each box of fruit had a large label identifying where it was from: “Washington Local Blueberries,” “Hawai’i Local Pinneapple,” “California Local Strawberries,” and “Oregon Local Apples.”

From a physical and aesthetic standpoint, elevators are a space of non-belonging. Most elevators look similar, with plain walls and no decorations, similar to the feeling of airports and Costco. You would not normally think you are anywhere in particular, for you could be anywhere.

I spent hours across multiple days existing in elevators on the Portland State University campus. While inside of the elevators, I told strangers that I was a local of the elevator. I asked them questions such as, “Are you a local?” and together, we explored the meaning of what it means to be a “local.” Strangers responded in multiple ways, including: ignoring me, walking out of the elevator, staring at the wall silently, telling me I cannot be hanging out in the elevator and how I must leave, partaking in conversation with me about localism and identifying ourselves as a local or not, explaining their personal history of developing a relationship with that specific elevator, and asking what it meant to be a local.

I talked with strangers around downtown Portland to determine if they were a local or not. If they were a local, I would ask them what their favorite part around the Park Blocks (in downtown Portland, Oregon) was, and if they were not a local, then I would not ask them this question. I let them know that I was creating a local map, featuring locals’ favorite spots. I paid locals $1.00 in compensation for sharing with me their favorite local spot. I created a map, featuring all of the spots around the Park Blocks. Locals were given the map for free, and non-locals had to pay $2.00. Both locals and non-locals were notified about the varying price difference. I asked a few people if I could take a photo with them or of them, with the map. This project considered the social and capitalistic social power structures and privileges that come with being a local or non-local in the world.