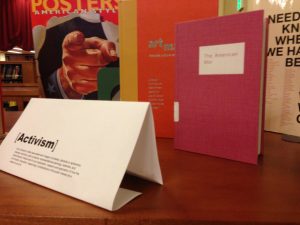 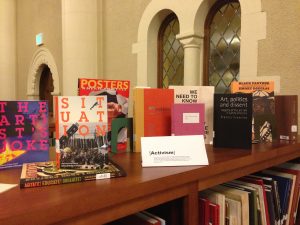 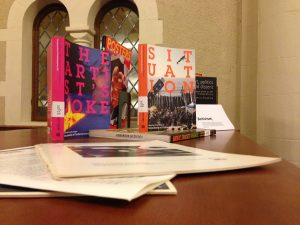 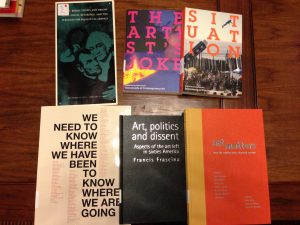 Featured books on Activism in Art The Anne and James F. Crumpacker Family Library is the region’s most comprehensive visual art resource open to students, researchers, docents, staff, and free to the public. The Library’s collection of more than 35,000 volumes originated in 1895 and includes current and historical periodicals, art archives, and resources specific to the Museum’s history. Located on the second floor of the Mark Building, a former Masonic Temple, the Library’s comfortable reading room, much of the decor and furniture from the period, and irreplaceable, non-circulating collection provide an urban retreat for anyone interested in art.”

Special thanks to the Library Director, Debra Royer, who was very knowledgable and more than willing to help in searching and minging the Library for not just activism in art, but also the rest of the Journal’s themes and assisting the other Social Practice Journal’s editors.

“Change is inevitable, growth is optional”

-writing on the wall

Originally I thought an anonymous bite of genius found scribbled on the restroom wall, but with more research found it has been quoted by John Maxwell, the evangelical Christian author, speaker, and pastor who has written more than 60 books, primarily focusing on leadership. I am not sure about the author, but the quote is pertinent. It is nevertheless one of many versions of quotes pertaining to this basic human experience. I believe that it is at that very first experience of change that provokes us to express our emotion and reaction to change.

Activism encompasses many qualities that function transcendentally in art; from traditional graphical forms, to performative, to participatory. There are many forms of art that have been used as tools in social movements throughout history. It has only been in the last century that art has been recognized as a used tool, other than for aesthetics for dissemination of information or education. Different forms of counter-institutional art, the Dadaists for example in Europe at the turn of the twentieth century, have developed in order to incite a social conscious change. But there are other examples of activism within art that are not visual, as in the Theater of the Oppressed developed by Augusto Boal in the 1960’s influenced by the work of the educator and theorist Paulo Freire.

With these vast examples of activism manifesting within art it was hard to only pinpoint one word or one overarching phrase that would produce results in one find. I realized that this also means people have different in interpretations of what or how activism may be represented in art. This display is a result of that realization. I tried to initiate various searches using the Library’s Online Collection Database to produce this exhibition of books that either ARE examples of activism, represent social activism within their pages, or are collections of thoughts and works of artists. My hope is to introduce community to different forms of art and to invite community to run their own searches based on their own interpretation of what activism is to them.